Speaking In Tongues runs until 19 March at the SBW Stables Theatre, Kings Cross. By Andrew Bovell, directed by Sam Strong.

Speaking In Tongues is the closest to a perfect script I have ever encountered.

Bovell apparently amalgamated two separate scripts to make Speaking In Tongues - which is sort of obvious when you think about it, but has to be one of the happiest theatrical accidents ever. The thing that makes Speaking In Tongues so special is the way it's layered, the stories interwoven, intertwined, tangled. I'm struggling to think of a piece that's more cleverly structured, and the only one that comes close is When The Rain Stops Falling. Surprise, surprise, it's also by Andrew Bovell.
In the first act, we meet two couples - Leon and Sonja (Christopher Stollery and Lucy Bell) and Pete and Jane (Andy Rodoreda and Caroline Craig). All four go out drinking. Leon meets Ja 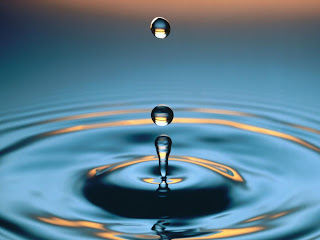 ne. Pete meets Sonja. One couple cheats. One couple backs away. And from this one evening, the stone dropped in the limpid pool, the ripples spread wider and wider and wider.
Griffin Theatre's production of this play is simply outstanding. This script is brilliant but it's also VERY difficult for the actors, and I could not fault any of them. Not even a little bit, not even at all. Caroline Craig as Sarah in the second act was especially good, but seriously, if I was going to pick a flaw? I'd have to sit here for a really long time.
This play contains what has to be one of the most annoying theatrical devices ever - two people speaking at the same time, saying exactly the same thing. Hell, even Oscar Wilde didn't quite pull that one of - the bit in The Importance of Being Earnest where Cecily and Gwendolen simultaneously tell Jack and Algernon that their Christian names are an insuperable barrier and then Algernon and Jack simultaneously reply that they're going to be christened that afternoon doesn't really work even though it's meant to be a joke, and although I've seen a lot (like, a LOT) of productions of Earnest, I've never seen actors quite pull that moment off. If Oscar can't do, I would generally maintain that no one can...
*
...but they get it JUST RIGHT in Speaking In Tongues, and there is a LOT more than two lines spoken at the same time.
Maybe the reason that this device works in this play is because of the way just about everything seems to parallel everything else. Leon and Jane's experience mirrors Sonja and Pete's. The lives of these two couples are so intertwined that it seems only sensible that they would be saying the same things. It might seem contrived that Sonja happens to run into Jane the next night in a bar, Jane sitting and looking for Sonja's husband - but when you consider later how tangled the storyline of the first act is with the story of the second act, where Valerie the psychologist treats Sarah who might be sleeping with John and who saw Neil whose shoes Pete has; how Jane saw Nick throwing shoes that belonged to Valerie, a crime which is investigated by Leon... everything is coincidence in this world, because everything is connected.
* 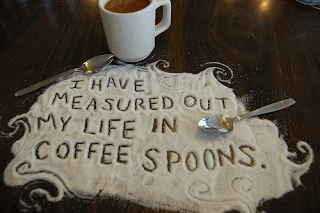 Because of this, there is an intense claustrophobia in Speaking In Tongues, making Griffin's tiny diamond stage the perfect place to stage it. Every character is trapped - trapped in their own skins, in their own lives - but the minute someone does something to change it (like sleeping with someone they're not married to) the ramifications are instant. There is no personal change without changing everything. It's the dramatic articulation of the The Love Song of J Alfred Prufrock - 'do I dare disturb the universe?'
*
It makes perfect sense to have the same actors playing multiple characters, because everything is connected and mirrored and paralleled (is that a word?) The only character who escapes is Valerie, and her solution is very... final. The door that opens that she runs through leads to a 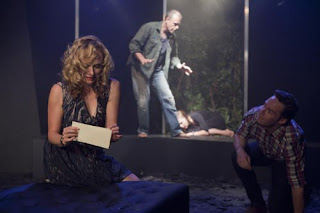 wilderness both lush and terrifying. It smacks a little of Picnic At Hanging Rock, the disappearance into the landscape, being consumed by it. This door - which obviously leads to death - is the only escape from the ripple effect of decisions within the universe of the play. (Sidebar: my sister and I have been wondering for ages whether there was a door at the back of the theatre there. We were convinced there wasn't. Seeing this play, we finally found out there was.)
*
I cannot speak highly enough of this production - the script, the acting, the direction, the set, the tech-y stuff... everything was 100% outstanding. It's hard to imagine a way this production could be better. I, for one, can't fathom it.
And if you haven't seen it, you're not going to be able to - it closes today and it's totally sold out. This tells us a few things: 1) I need to start writing reviews earlier; 2) I'm not the only one who thinks this show is excellent; and 3) you really, REALLY missed out.
Posted by Jodi at 3:53 PM