I reviewed Rainbow's End at the Illawarra Performing Arts Centre (Riverside Theatres, part of the Merrigong 2011 season) - you can read the review here.
Posted by Jodi at 12:16 AM No comments:

And No More Shall We Part 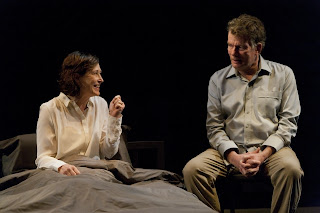 And No More Shall We Part runs until 3 September at the SBW Stables, Kings Cross. By Tom Holloway, directed by Sam Strong.

And No More Shall We Part is the story of Pam (Linda Cropper) and Don (Russell Kiefel), a couple who have been married for a long time. Pam has a terminal illness, and she and Don need to figure out how to end their life together. She is determined to die with dignity. He is desperate not to lose the love of his life, and is finding it impossible to say goodbye to her.

This play is exquisite. I don't even know where to begin to talk about it. For the second half of it, my primary focus was not actually sobbing out loud. The love story aspect of the play is played down in the publicity, but while it's not a love story in the traditional sense, the devotion of Pam and Don to each other, the way it's shown that they would do anything for each other, is the most achingly romantic thing I have ever seen. And No More Shall We Part is heartbreaking, heartrending, beautiful, deeply, deeply affecting. It is visceral, raw - I have never been to theatre this intense, this emotive.

And it's not because this play tugs on the heartstrings. There are no cheap shots in Tom Holloway's script. This play is not an emotional rollercoaster. There is no rise and fall, no unnecessary grandiosity, no false hope. Instead, it is simply quiet tragedy, domestic, everyday. Writing, directing and acting have combined to their best effect in this play, creating theatre that transcends story to become nearly reality.

The one small criticism I could make of this play is that the stichomythia (short lines bantered back and forth) was sometimes handled too glibly by the actors - occasionally it didn't seem as though the actors were listening to what the other was saying. However, this problem was largely confined to the opening scenes of the play. The last scenes - where Pam decides to die, and Don, however unwilling, decides to help her do it - are absolutely heartbreaking. And just when you think it can't get any sadder... the end of the play... oh my God. There is no way I can express in the confines of this review how terribly, terrifyingly sad And No More Shall We Part is. Tom Holloway's writing, Sam Strong's direction, Linda Cropper and Russell Kiefel's acting - all these combine to make what is one of the most deeply moving pieces of theatre I have ever seen.

I cannot recommend this play highly enough. I was foolish enough not take tissues - seriously, listen to the warning Griffin have on their website. This play is exquisitely sad, deeply moving, and wonderful theatre.


PS: I was lucky enough to go along to the Inside The Rehearsal Room event Griffin held for this play a couple of months ago, and I really feel like it heightened my appreciation of the play. Props to Griffin for having such cool events - I highly recommend them!

PPS: You may have noticed that I'm writing a fair bit for Australian Stage now. I'll link to all my reviews there over here, as well as writing new reviews just for the Back Seat.

Email ThisBlogThis!Share to TwitterShare to FacebookShare to Pinterest
Labels: And No More Shall We Part, Griffin Theatre, Inside The Rehearsal Room, Linda Cropper, Russell Kiefel, Sam Strong, theatre, Tom Holloway

I reviewed Unsex Me at Riverside Theatres in Parramatta for Australian Stage - you can read the review here.

The Haunting of Daniel Gartrell

I reviewed The Haunting of Daniel Gartrell for Australian Stage - you can read it here.
Posted by Jodi at 3:48 AM No comments:

I reviewed Drake the Amazing + La Dispute at Darlinghurst Theatre for Australian Stage - you can read the review here.
Posted by Jodi at 9:06 PM No comments: