I should probably start this piece with an admission. I have pretty close ties to Canberra Rep and I know nearly all of the people in this piece. So if you are looking for objective reviewing, this is probably not the review for you. This said, I'll try and give my honest opinion of the show.

On the whole, I think it's a very well performed show, but it's built on a rotting foundation - the script is really... not good. I love the concept. I love the ideas. I find the idea of chickli 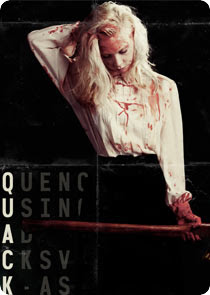 It's about half an hour too long and a lot of the jokes - and there are jokes, which I think the cast made a really good job of - are obscured by too much dialogue. There should be serious questions underpinning even the fluffiest of entertainment, and Secret Bridesmaids' Business certainly has one of these - if it were you, and your fiance were having an affair, and you were getting married in twelve hours... would you want to know?
Unfortunately, there was simply too much stuff in this play for that question to get adequately answered. I appreciate - and respect - that Coleman was trying to give all six of her characters clear and separate motivations. But in doing so, she's obscuring the key question of the play, which is deep and serious and ultimately tragic. And great humour arises out of great tragedy, and so we don't get a sense of either.
The thing that really doesn't work for me at all is the monologues that Coleman has given each character. They function as an alienation device: which is fair enough, theatrically - that's an option you have open to you. But they break the 'show, don't tell' rule on the most fundamental level, and I honestly don't think the show would have lost that much if you left them out. I think that in the second act they're meant to redeem the two characters who are the most unlikeable - James, the cheating groom, and Naomi, the other woman. With the latter, it succeeds to a degree; with the former, not so much. But any sentiments that Coleman was dying to get out in these monologues, I think she could have done through dialogue. They're awkward, they break the flow, and seriously? if you wanted a scene change, a lighting change or a blackout would have done.
All this said - and even though I am good friends with most of the cast, I say this honestly - the cast do a really good job of what is an achingly clunky script. The standout and showstealer is Anita Davenport as Lucy, who does a stellar job. Lainie Hart is also excellent as the bride Meg, and the rest of the cast - Heather Spong as Angela, Alex de Totth as Naomi, Trish Kelly as the mother Colleen and Martin Searles as the groom James - all do very well indeed. There's no weak link casting-wise, though the show does get off to a very nervous start and doesn't really crank into gear until Lucy enters (about ten or fifteen minutes in).
No, the problems of this show lie in the script, front and centre. This show has all the right ingredients for a fun night out - chicklitty fluff with an excellent cast. You should not be thinking 'when is this going to end?' And I was.

I like Coleman's ambiguous ending - I won't give it away, but it's pretty decent - but I wish it was more ambiguous. I think there's obvious signs as to which way Meg chooses, and I think the show would be far more effective if it were less clear. It would certainly provide more food for thought. And it would be even better if the show were half an hour shorter. Honestly, if you took a brutal red pen to this show, then you might come up with something half as long and twice as good.
Right. Enough harping on the script. The set is very good and highly functional and the costumes are extremely effective - the bridesmaid dresses strike just the right level of total fugly. The bridal gown is also very appropriate (though I did notice it needs to be ironed!) And wherever Meg and Lucy buy their clothes, I want to shop there. I saw this show twice - on preview night and then again on the Wednesday of the final week - and the technical hitches that were there during preview had been fixed by the second viewing, which I was glad to see. (No surprise blackouts in the middle of scenes = good times.) 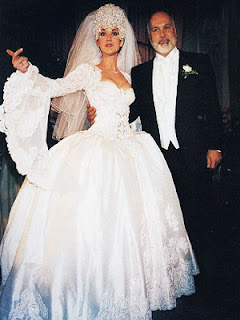 The one thing, production-wise, which really does let the show down is the music. When you walk in, you'd be forgiven you were going in to a stage version of a Hornblower novel. It's all terribly naval and British, and although I think it was supposed to be a wedding march, I just wanted to salute. Also, there's this one piece which played during interval which seriously sounded like it should be in a Hammer Horror movie. Considering that this show is pretty much the opposite of Gothic, that's something that needs to... considered. And there was totally a golden opportunity here to use all those cheesy wedding songs that everyone hates - all that Celine Dion and Shania Twain and... hell, you could have used the nutbush. Missed opportunity, I think. (This idea was not mine, though I wish it was. The trashy wedding song notion belongs wholly to my friend Rashmi. But that picture of Celine is ALL ME.)
I really wanted to like this show. I think the cast is great and sound aside, I think the production values of this show are pretty good, especially considering it's amateur. But seriously, this script has problems. People should really think twice before performing it - or at least bring a red pen and be prepared to use it. Chicklit for the stage is a great idea. But just because it's fluffy doesn't mean it doesn't have to be punchy.
Posted by Jodi at 1:58 AM