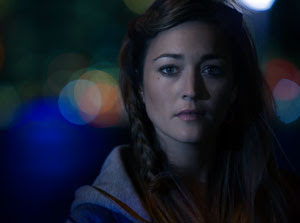 The Coming World runs until 3 July 2011 at Darlinghurst Theatre. By Christoper Shinn, directed by Caroline Craig.

The Coming World was, to me, a play almost completely incongruous with its title. The term 'coming world' is epic, bringing to mind far horizons, a sweeping scale, Lord of the Rings style cinematography and possibly a few apocalypses. However, what it was was a story about a girl who worked in a video store and her relationships with a set of rather dysfunctional twins. It may have been set on a beach, but the scale was hardly sweeping (in any case, on the Darlo stage, 'sweeping' would be rather difficult'). The Coming World was not exactly universal - instead, it was almost aggressively insular.
This insularity is not necessarily a bad thing, but - as noted above - it did put the play at odds with its title. Dora (Cheree Cassidy), who works in Blockbuster, is dating Eddie (Ian Meadows), who is stupid enough to get conned into being a drug mule. What Eddie does next ends up defining the entire story - his actions break like the waves of the beach on which the play is set (you see what I did there) over both Dora and his twin Ty, with whom Dora spends the second half of the play. Despite the ripple effects of Eddie's actions, however, there is a real sense of containment and claustrophobia about this play. Dora and Ty are both bound to and trapped by Eddie, even after Eddie removes himself from the picture. Apparently, The Independent said of this play:
"The Coming World is a small play, but, after it ends, you can still feel the ripples."
I feel this is a pretty fair assessment, but considering this small play had so much stuff packed into it, I feel like it should have been saddled with a less epic title.
Both Cassidy and Meadows were very effective in their roles - especially when I got used to the New England accent they affected. (Embarrassing note - I skimmed the blurb, missed the New and read the England, and thus spent the first five minutes thinking 'this is the worst English accent I have ever heard EVER!') Meadows seemed more comfortable as Ty than Eddie, and Cassidy seemed to relate better to him as this character rather than as Eddie. I felt that in both acting and directing, the second half of the play was superior to the first. The play was really about Dora and yet most of the time she was not the agent behind any actions. In the second half, interacting with Ty instead of Eddie, she at least got to move things forward a little instead of providing resistance for the increasingly erratic Eddie.
Caroline Craig's direction was intelligent - the salient plot points and themes were certainly hit - but I felt at times the play was a little sedentary and could have used an injection of movement. However, the writing, rather than the direction, is probably at fault for this - there is no point in a lot of the scenes where movement seems sensible. The little Darlo stage definitely suited the insularity of the piece and Charlotte Lane's design, coupled with the lighting design of Jack Audas-Preston, was outstanding. The scene where Dora was floating in the sea with the light shining through the seaweed/video tape was incredible. I loved it.
This play was definitely a small play - it didn't really have a lot in way of plot - but it crammed a lot of themes in there, and not all of them were necessary. In places, I felt it succumbed to a flaw common to literary fiction, which is themes for the sake of themes. Maybe I just didn't get it, but there was a massive emphasis on clothing and costume and tattooes and suchlike which just did not seem related to the plot or to characterisation in any salient way. To go all Year 9 English on it, if there had been more of an appearance vs reality bent to the play, maybe it would have been more appropriate. Despite only being an hour long, I felt like the script sometimes got bogged down in itself, obsessed with its own intensity and complexity.
Overall, The Coming World was a well-acted, well-directed, spectacularly designed night at the theatre - but at the end, I felt there were a few too many loose ends that needed tidying up. This was largely a) because of the plays proliferation of and preoccupation with OMGDEEPTHEMES; and b) the rather abrupt and out-of-the-blue ending, which to me (and to my psychology-studying sister, who was with me), did not seem in any way anticipated by the rest of the play. The production of it was very hard to fault, but I'm having trouble working out what The Coming World was trying to say. I do not expect theatre to spoon feed me answers - but in many cases, I would have liked to have understood where the questions were coming from.
Posted by Jodi at 4:55 AM