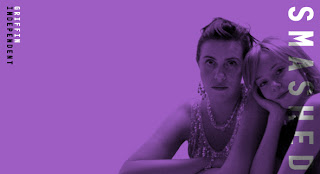 One thing is for sure: Lally Katz can write. Hot damn can she write. And she can - unlike many other writers who are very good in other media - write for the stage. She understands the art of writing for theatre. I've read Katz on the page before but I've never seen her work performed. She's great on the page, but on stage, she comes to life.

Smashed is lyrical and elegaic, a short play about friendship and memory, a play whose impact is heightened rather than hindered by its short length. (It only runs for 45 minutes - given Griffin's 7pm start, this means the play finishes before most others have begun. When you live far far away down the coast like I do, the value of this cannot be overstated.) It's the story of best friends Ruby and Hazel, who share one of those spectacularly intense friendships remarkable among teenage girls. Ruby is naive, innocent; Hazel is worldly, jaded. Both girls need the other. But they are living on borrowed time.

I love that this play is an exploration of friendship - female friendship more specifically. As a subject matter, friendship is often shafted by romantic relationships, given a back seat if it's explored at all. Female friendship is something that's often treated as suspicious - where it is treated in texts at all. One of the things I really liked about Smashed was that Hazel and Ruby's relationship is the most important relationship in either of their lives. Their friendship defines them, shapes them - their relationship is almost symbiotic, the two girls intrinsically linked, one unable to survive without the other. What affects one affects them both. They are two halves of the same whole.

Katz also raises interesting questions about what friendship really is. Every conversation, Hazel and Ruby note, is based on the echoes of conversations had before. A friendship is a collection of shared memories, of shared memory; but it is more than the sum of its parts. It is something far more weighty and valuable than the hours, minutes, seconds spent together. But what is left, Katz asks, when a friendship ends, but memories and ephemera?

If it's not already clear, I really, really liked the script, and you can bet I will be seeking out more of Katz's works in performance. I missed both Neighbourhood Watch and A Golem Story and I wish I hadn't. There's a certain fairy tale quality to Smashed which is completely enchanting, and this was enhanced by the doll's house-esque set. Coming into the theatre, I thought there was too much clutter on the stage - anyone who has been to the SBW Stables theatre knows how little that stage is. In retrospect, while it still might have been too busy for the stage, the set imbued the play with a sort of Angela Carter quality which really suited it.

Katherine Tonkin was good as Ruby, but the standout for me was Suzannah McDonald as Hazel. Her role was more difficult, as she effectively had to carry narrating duty and explain the concept of time travel behind the play (more props to Katz that she resisted the urge to turn this into an expository infodump o' doom). McDonald carried it off fantastically. She has a pixie-like, mischievous quality about her that was great for this character, and she resisted the tendency to overplay, which would have been easy. I hope to see her in more things.

In short, it's hard to pick out something I didn't like about Smashed. I saw it in preview and am seriously considering taking a different set of friends to see it again. This is a play that will resonate with many different people in many different ways. If you've ever had a friend, this play is for you.
Posted by Jodi at 4:38 PM